Home > All About Calories > How to Deal With High Calorie Weaknesses

How to Deal With High Calorie Weaknesses 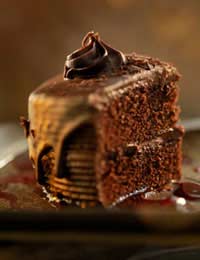 Who can resist the odd chocolate bar or roast potato from time to time? Most people have a weakness for high calorie foods of one kind or another - and what a dreary world it would be if we could never indulge ourselves. The important thing is not to let these temptations become daily battles.

Try to eat sensibly throughout the day. Feeling full and satisfied is the best way to stave off cravings and food temptation. Drinking water helps too. When the will to resist is just not strong enough, however, there’s no point denying yourself and feeling deprived.

There are often low calorie choices which may still be able to fool your taste buds, and satisfy your craving.

Chocolate - Top of the Cravings Chart?

Chocolate is probably the greatest weakness for most people. A high calorie food, both in fat and carbohydrates, it can put a serious dent in healthy eating plans.

Perhaps all you need to satisfy a late evening craving for high calorie food is a cup of delicious cocoa. A generous teaspoon of cocoa is fewer than 10 calories. Mix it with a little boiling water and top up with semi-skimmed or skimmed milk for a low calorie treat.

It's easy to be in denial here; we tell ourselves we’d rather have one scoop of the most expensive ice cream made with real cream, than twice as much of a low calorie version. It’s better to be realistic and avoid the temptation, for example

Just passing by a chip shop is enough to weaken some people’s resolve to forego fried food. Deep fried chips chalk up over 250 calories for only 100 grams and chip lovers will rarely have such a modest portion.

Steer clear of pastries if you are hoping to lose weight with your low calorie lifestyle; but, if you must indulge, choose carefully.

Hidden Calories to Watch Out For

Test Your Knowledge of Calorie Values

Easing the Switch to Healthy Eating